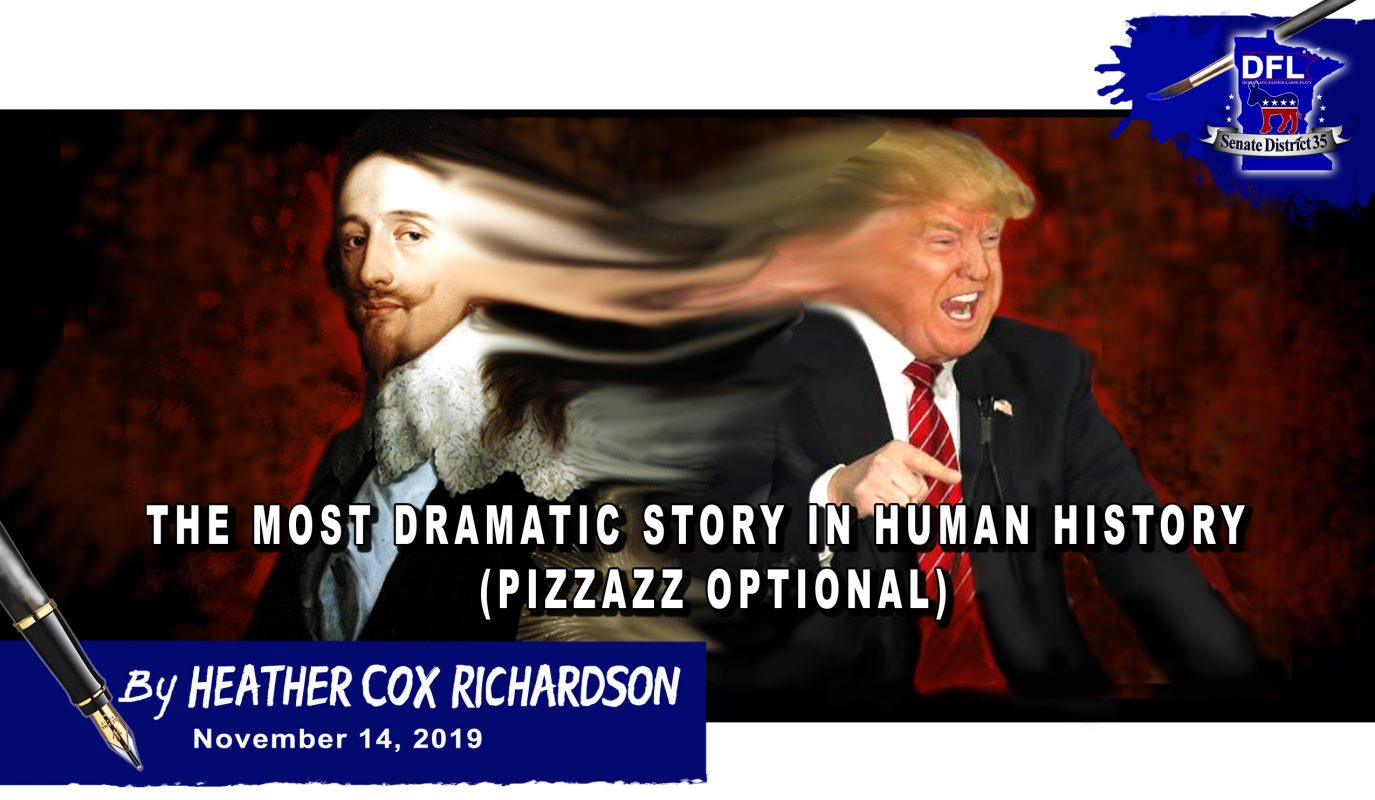 “… they are echoing the argument King Charles I made in 1649 when he insisted that Parliament could not question his actions because his power was given by God and the laws of the land. He was untouchable… “

Last night, NBC News complained that the day’s impeachment hearings, featuring testimony from former Ukraine Ambassador William Taylor and diplomat George Kent, had been substantive but lacked “pizzazz,” so likely would not convince Americans to pay attention to Trump’s scheming. Today, Fox News Channel personalities continued to harp on the idea that the hearings were “boring.” A strong Trump backer, Mark Meadows (R-NC), said it was hard for him to stay awake through yesterday’s events.

Interesting. I can see why Trump’s people want badly to convince their base not to tune in to hear such solid witnesses tell such a damning story. And sure, sitting and watching five hours of people talking isn’t everyone’s cup of tea (it sure isn’t mine– I have to knit or clean the kitchen or bake while I listen). But boring? Can’t wrap my head around that.

To me, what is playing out in America right now is the most dramatic story in human history. It is timeless. It is the story of whether or not people will consent to being ruled by a few wealthy leaders without check, or whether they will stand up for their right to self-determination and equality before the law. Yesterday, the central stage of that drama was a hearing room with a bunch of guys in suits (except for Jim Jordan), who were performing for the cameras and the president watching the feed; in 1776 it was a bunch of young men in knickers and wigs who argued for days over the wording of the Declaration of Independence even as they knew royal officials would execute them if their rebellion failed. In 1860 it was a tall, absent-minded and brilliant backwoodsman who left his lucrative law practice to stop the spread of slavery; and a hundred years later it was a Black former sharecropper who had been beaten almost to death by police to keep her from registering her Black neighbors to vote. For none of these people did the work of democracy have pizzazz. It was slow and grinding and threatened– and sometimes took– their lives. But there is a reason we honor these boring men and women, and don’t remember their flashy neighbors.

The three things that jumped out at me today speak to this larger story: the president appears to be continuing his pattern of aligning himself with foreign oligarchs rather than with democracies. Yesterday, while the impeachment hearings were taking place in the Capitol, Trump was hosting Turkish President Recep Tayyip Erdoğan at the White House. Erdoğan is an authoritarian ruler whose troops overran northern Syria after Trump pulled the US troops out in mid-October. The troops have been accused of war crimes in their attacks on the Kurds, our former allies in the fight against ISIS there. Trump praised Erdoğan and permitted him to show a propaganda film presenting the Kurds as terrorists to Senators invited to a meeting. A White House visit strengthens Erdoğan’s position in Turkey and in Syria.

The next story that shows Trump aligning with foreign oligarchs comes from Josh Kovensky at TalkingPointsMemo. Kovensky takes the story of the Ukraine scandal back in time to the beginning of the year, and the longer scale puts some key events into place. In February 2019, Ukraine President Petro Poroshenko, an oligarch with a reputation for corruption, was facing an election in March, and then a runoff in April. His chief prosecutor, Yuriy Lutsenko– also famous for his corruption — made a deal through Trump’s lawyer Rudy Giuliani and his associates Lev Parnas and Igor Fruman that Poroshenko would be invited to the White House, which would boost his standing at home. In exchange, Lutsenko would announce investigations into the 2016 election and the Bidens. That should help Trump.

The deal got underway in March, when Lutsenko talked to journalist John Solomon, for The Hill newspaper, smearing Marie Yovanovitch (the U.S. Ambassador working against corruption, who is testifying tomorrow) and announcing investigations, as planned.

But then, in April, Poroshenko lost to Volodymyr Zelensky. Trump’s folks had to figure out a workaround with a new man. Hence Giuliani’s announced trip to Ukraine in May when he said “We’re not meddling in an election; we’re meddling in an investigation, which we have a right to do.” (Remember that?) Popular outcry forced Giuliani to cancel the trip, and the White House then turned to yet another channel to make the announcement official. I won’t belabor the rest of the Ukraine scandal timeline here (although I’m happy to rehash it if it would be useful); Kovensky fleshes it out in his piece (linked below or searchable). The point I want to make tonight is that Trump was quite comfortable working with a corrupt oligarch to undermine fair elections both abroad and at home.

Interestingly, they are echoing the argument King Charles I made in 1649 when he insisted that Parliament could not question his actions because his power was given by God and the laws of the land. He was untouchable. It was in part Charles’s argument that inspired the Founders to put impeachment into the U.S. Constitution in 1787. In a country based on the idea that everyone is equal before the law, they believed that the representatives of the people must have a way to check an executive run amok.

And now, centuries later, we are still struggling over this epic question. Can a nation based on the idea of equality and self-government survive? Or will it inevitably revert to a traditional regime in which a few rich men are better than the rest of us, and whose rule therefore must not be challenged?

Its a question that might not have a lot of pizzazz, but it sure isn’t boring.

Originally from rural Maine, and educated at Exeter and Harvard, Boston College Professor of History Heather Cox Richardson is a political historian who uses facts and history to make observations about contemporary American politics. She is the author, most recently, of To Make Men Free: A History of the Republican Party. Professor Richardson says, “I write books about the American past, and write articles about modern politics. The past informs my work on the present, not the other way around.”