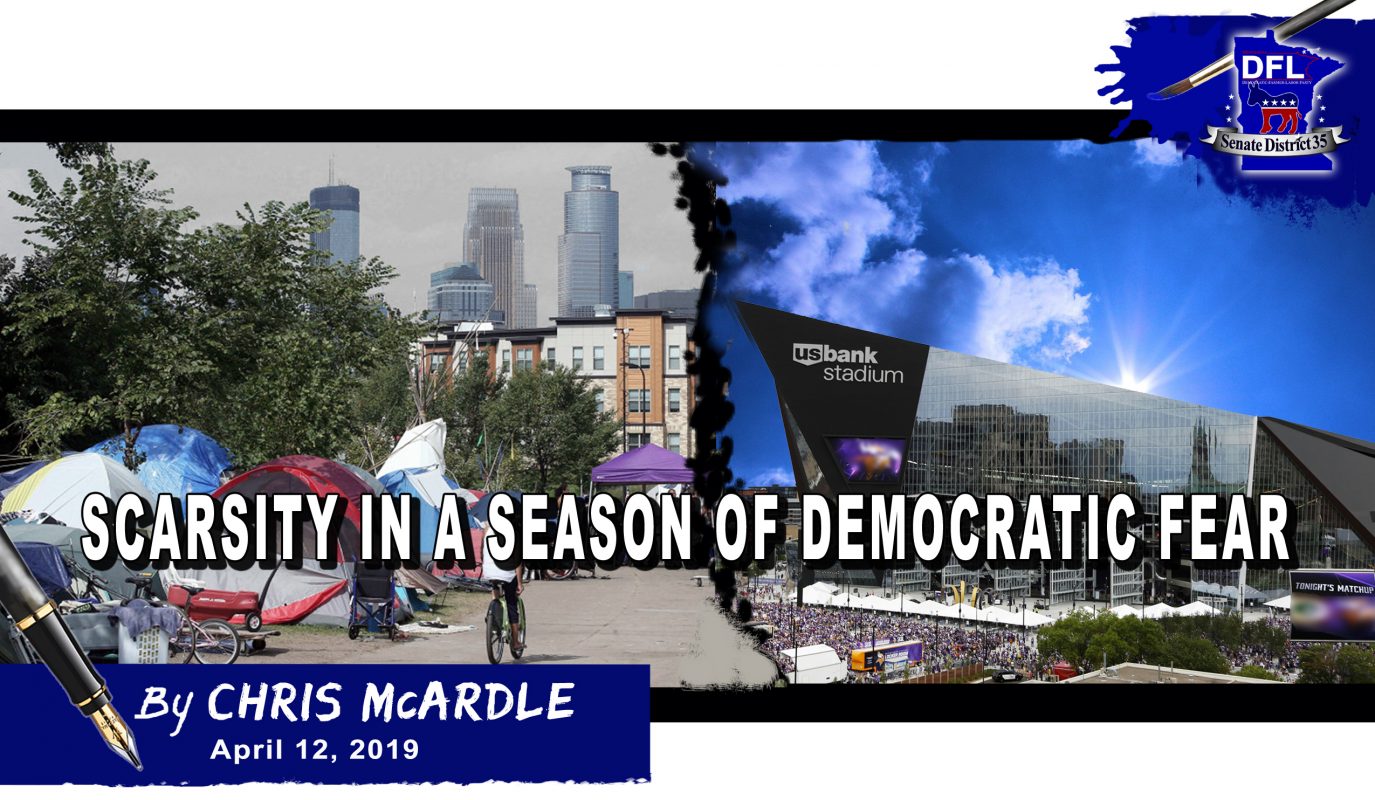 “…It’s all still grounded in the idea that someone is going to take our X away
and leave us with less until we don’t have enough anymore….”

It was the Rev. David Lose, formerly of Luther Seminary in the Twin Cities, who first got me thinking about the binary of scarcity versus abundance. He spoke of it in the realm of marketing, citing the made-up affliction “halitosis” as illustration. You might not know this, but Listerine made “halitosis” up as early as 1928. Their marketers knew something essential about how to motivate people: make them feel scarcity, and they will attempt to eradicate it. Give them a convenient way to do so, and it’s like printing money. In the case of bad breath, “halitosis” encouraged people to regard their bad breath as an essential lack—a lack of good breath, or perhaps a lack of charm or attractiveness. You aren’t enough, but Listerine can fix it!

Marketers have run with this idea ever since in myriad ways. Women, your breasts aren’t big enough. Your thigh gap isn’t wide enough. Your hair isn’t blonde enough. (Barbie is wholly designed to make women look at themselves through a lens of scarcity). Men face similar scarcity-laden messaging. Your six-pack is only four. Your SUV isn’t big enough. Your stock portfolio isn’t rich enough. That diamond you bought for her isn’t sparkly enough. We’re all bombarded with the message:  we are not enough.

The political realm is no stranger to scarcity-talk. Politicians of every stripe routinely invoke the idea of scarcity in order to motivate and demotivate voters. Republicans have typically run on the notion that you don’t get to keep enough of your hard-earned dollars due to taxation, and liberals want even more of it. Their anti-immigration rhetoric relies on convincing voters that there’s not enough prosperity to share with immigrants—except when the messaging isn’t subtle at all (“They’re coming for our jobs!”). The rising tide of nationalistic rhetoric promises there’s not enough goodwill left in the world for America, which is why we need to bulk up our military, which is itself not strong enough to protect us. Pro-gun campaigners often rely on the notion that liberals want to take all the guns, which means people won’t be safe enough in their homes. If you want a practical example, look at Obama: the Tweets alone promised that he wasn’t white enough, honest enough, and most dramatically, not American enough. Scarcity is everywhere.

The Democrats are no neophytes to scarcity-talk themselves. Lately, they often campaign on the notion that Trump and the GOP are going to take away hard-earned rights and privileges. They’re coming for your healthcare! Your bandwidth! Your democracy! Your tax dollars! (Both parties use scarcity of income; it’s just that the GOP warns of wealth redistribution to the lazy and undeserving, while Democrats warn of redistribution to the ultra-wealthy). It’s all still grounded in the idea that someone is going to take our X away and leave us with less until we don’t have enough anymore.

In this season of deep, Democratic anxiety about Donald Trump and the fate of the Union, we progressives have taken that scarcity line and run with it. In our ever-growing fear at the prospect of another Trump term and of the resurgence of white nationalism and authoritarianism, it’s not hard to see scarcity getting frantically splattered over the entire field of Democratic Presidential aspirants. It seems no matter where we turn, some candidate or another is being loudly rejected in declarative hashtags as not “enough” for the all-important task of defeating Donald Trump.  These have all been named as disqualifying in this pre-pre-pre-primary season (take note: some of these are substantive critiques of critical importance, and some are not; your mileage may vary).

Harris? Not tenured enough in Washington. Not harsh enough against Steve Mnuchin.
Klobuchar? Not nice enough to her employees. Not tough enough on police brutality.
Gillibrand? Not fair enough to Franken.
Booker? Not true enough to the little guy.
Sanders? Not enough of a Democrat.
Warren? Not politically savvy enough.
Buttigieg? Not experienced enough in a big enough context.
Biden? Not young enough. (He’s not the only one.)
O’Rourke? Not humble enough.
Gabbard? Not pro-LGBTQ+ enough.
Castro, Yang, Ojeda, Delaney? Not famous enough!

Need I mention the most recurrent label of scorn? NOT PROGRESSIVE ENOUGH.

These maledictions result in endless hand-wringing that we Democrats “eat our own”. We set up “circular firing squads”. We “shoot ourselves in the foot” (tell that to the folks who think Democrats want to take away everyone’s guns). These charges are also rooted in scarcity: we simply aren’t disciplined enough, organized enough, or clear-eyed enough to win back the White House in 2020.

So here’s something I know: when Democrats win, it’s usually because we manage to shrug off the clinging tentacles of scarcity and start believing about ourselves what a couple of our former Senators taught us: we’re good enough, we’re smart enough, and doggone it, yes we can! This is what a mindset of abundance looks like. Obama is sometimes dismissed nowadays by folks mired in scarcity-thinking, but remember those heady days in 2008? He had us believing we were enough, and we believed him.

I’ll let you in on a little something, neighbor: we still are. We are enough. We were enough in 2016 to win the popular vote by three million, Electoral College be damned. In 2018 we retook the House by a large margin and sent to Washington record numbers of women and members of underrepresented communities. In Minnesota we retook the state House with room to spare. We returned Democrats to every statewide office, including an Attorney General whose opponent scraped the bottom of the scarcity-barrel in every way possible in his attempt to secure victory. In many instances, our candidates won not by invoking the specter of scarcity, but by dreaming aloud about what we can accomplish when we gather up an abundance of talent, resources, and care. Though the purveyor of this phrase did not herself win office, the idea of celebrating a “Politics of Joy” is exactly what this is.

In 2020, the task before us is to convince America that our nominee is kind enough, smart enough, decent enough, talented enough, and experienced enough to fill a President’s shoes. We start that task by believing it ourselves—by accepting our fear without letting it drown us, so that we can see the abundance in our midst, an abundance we long to share with everyone. We don’t need to scare people into voting for our candidates to win. We also need not shy away from a robust, vigorous examination of our many candidates’ records and leadership. To flee such debate out of fear we will hamstring ourselves is a disservice to the genuine neighbor-care to be found within the wide Democratic coalition.

We can do this. We are enough.