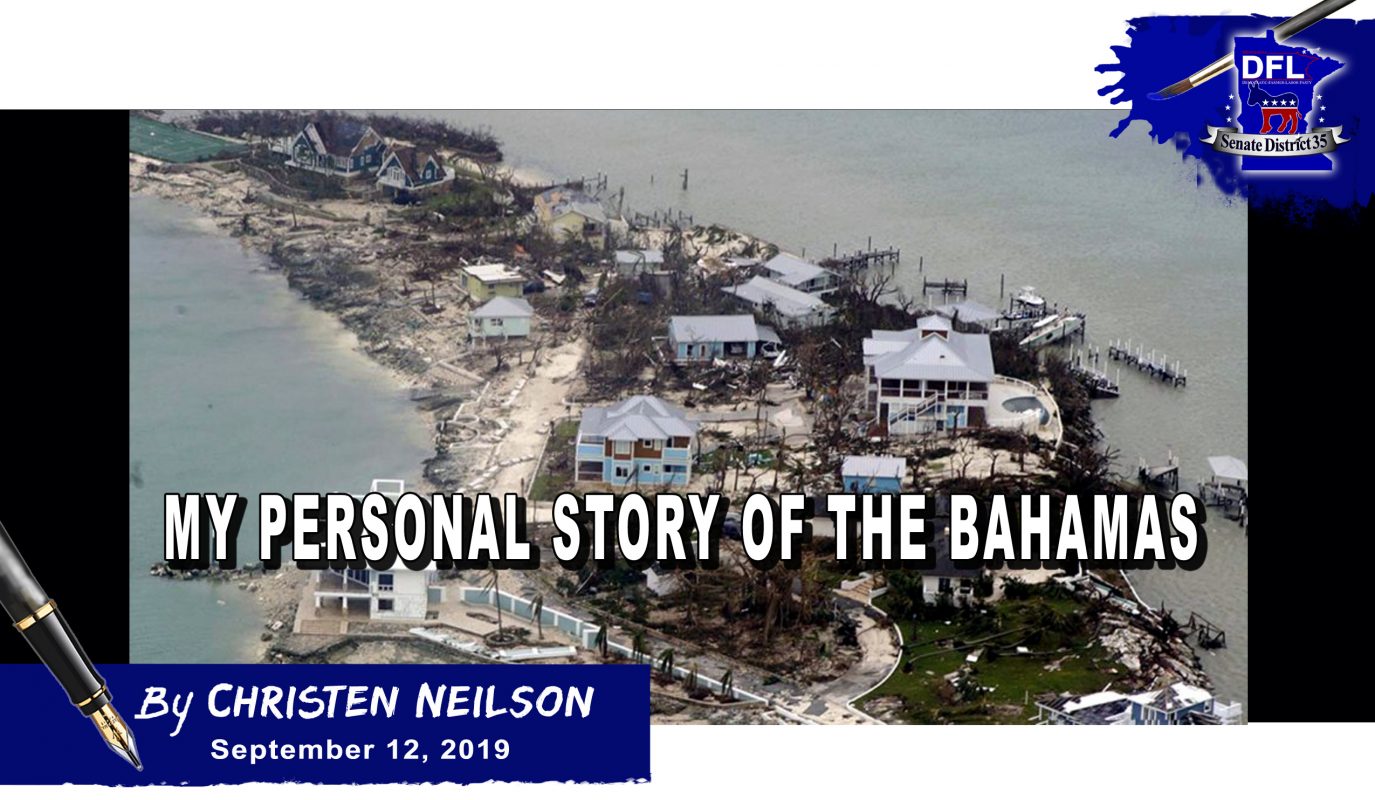 “…I endured an intense lightning storm on a beach with only scrub for about a mile. There was no way to avoid being the highest point. “

I have a personally painful story that I need to share. The people of Abaco, Bahamas once came to my aid, and may have literally saved me. This is hard, and even over a decade later I can’t tell it all yet, but here goes: At the end of my divorce, before I met Rachel Ludeking Nielsen, I dated a woman for a couple of months. I saw some serious flags, but deluded myself into thinking everything was alright. She convinced me to come to the Bahamas with her on a chartered sailboat. I thought it would be a great time. It felt a little early in the relationship, but I decided to do it. What ensued once I arrived was a very bizarre and twisted game that I didn’t want to play. The long story short: I ended up literally stranded on a Cay (Island) with virtually no people at all. I was left with my backpack and a couple Native American flutes I had brought with. Most of my cash somehow gone. And a storm was rapidly approaching.

In that moment I felt panic, but I suddenly felt every sense of failure, and stress, and anxiety, and sorrow from a two year long divorce, realizing I hadn’t really learned a thing. I was also deeply embarrassed to have fallen in to this bizarre situation – and still am. It was the absolute lowest point in my life.

I gave myself a bit of a laugh, when I had the thought that at least Jack Sparrow had rum. But that was fleeting.

I endured an intense lightning storm on a beach with only scrub for about a mile. There was no way to avoid being the highest point. At times I crouched on the balls of my feet, as you are taught to do in survival courses. It was so strong I could feel the charges traveling through the wet sand. I had heard music earlier and headed in that direction toward a path through a somewhat wooded area. The storm passed and I was able to follow the music to a bar and small resort. A couple from Australia, who didn’t even know me offered to take me in for the night.

The next morning the resort owner fed me and said there was someone who could help me. It was a poor fisherman. He had a boat that looked barely big enough to navigate Mille Lacs Lake, let alone open sea. He took me on a very long boat right to the next Cay where I could board a sea shuttle back to Aboco. The fisherman absolutely refused to take any money from me.

I should probably back up a second. In my first few days in the area around Abaco, I was appalled by the level of open racism that mostly European travers showed to the people of color who had lived on those islands a lot longer than they had. They would openly use the N-word, refer to them as “monkeys,” and just ridicule them. I was stunned by just how bad it was. I was also struck by the stark contrasts of wealth and poverty I saw. The injustices seemed pretty clear. And here I was, a lone white traveler, who they didn’t hesitate to take in, feed, and transport to safety.

Once back on Abaco I found an ATM and a small, local owned hotel that made room for me. The owner insisted on feeding me conch, which I wasn’t sure of, but could in no way refuse. It was actually incredibly good.

My Palm Pilot cell phone could only text, not call. Via texts, I reached out to my dad to get me early plane tickets off the island. I could have waited a week for my return flight, but had nowhere to stay, and most of my money for the trip was with psycho somewhere.

In the evening I took a stroll – in the wrong place. A man with a clerical collar pulled up and said, “you don’t want to be here right now brother, get in.” He took me back to the hotel.

The next morning I wandered the beach a little. I heard music down the way- different music this time. It was a familiar hymn. It was a tiny United Methodist Church. I opened the doors and was welcomed in. I was not in a good emotional state, and it was apparent. When I took a seat in a pew, the man behind my put his hand on my shoulder and said, “you’re welcome here my friend.”

You’re welcome here my friend seemed to be the mantra of so many of the native folks. They were treated so poorly by white people, but didn’t hesitate to help me – a privileged white person in a a time of trouble. Even the poorest people gave me every kindness, called me brother.

This afternoon I learned that church, along with every other place of worship in Abaco was destroyed. It felt like a kick in the gut.

The people of Abaco lived by the teachings that we take in people when they are lost and afraid, that we feed them no matter who they are, and that we show kindness to someone who is suffering.

I can’t help but remember a very cheerful and kind man. He was also poor. He came to the tiny airport to clean up the trash, and they paid him to do it. He asked me, “what’s your story?” I said, “I don’t have one really.” He said, “that’s a lie: you’re here at the airport leaving on a Monday. Tourists don’t leave on Mondays, unless something went wrong.” The older woman on the bench across from me leaned in toward me and said, “you know, we aren’t defined by our worse mistakes.” At this point the tears just came. I couldn’t stop them if I tried. This kind woman moved across to my side and put her hand on mine, and asked” what happened? The man collecting the trash came up to me with some fresh warm Johnny Cake (a cornbread fritter) from the food area. I had seen what they cost and I realized it was a great expense for him to do this. I said, “you didn’t have to…” and he said, “of course I did. You need it. Nothing makes you happier than Johnny Cake.”

He was right, it was soo good.

My flight was supposed to leave, but bands of monsoonal rains kept coming. A couple times the flight tried to leave Grand Bahama Island, but had to turn back. The rain would flood the runways. Workers were trying to unclog a drain pipe and operate a couple pumps to keep the runway clear. Every time it was almost good, more rain would come. I wondered what would happen in a hurricane. I watched one flight come in and hydroplane a bit sideways on the runway. It must have been one skilled pilot, but it was scary to watch him recover. Shortly after, my flight arrived. After a very bumpy flight to Miami, and a slightly less bumpy flight out of a stormy Miami, I was on my way home.

It was a tough couple of months combating anxiety and some depression, but I got to a place where life was good. And it got very good when Rachel entered my life.

I will never forget how painful and bizarre that experience was, but what I will always remember more, is the kindheartedness and generosity from those who had so little, and yet so much to give. I saw the absolute very best in humanity in a fisherman with a tiny boat, a stranger, and a trash collector.

They all reminded me that, when we love unconditionally, no one is ever really a stranger. They reminded me, just as my Native American friends had taught me, that we truly are ALL relatives.

Tonight I fear and my heart aches for my relatives in the Bahamas. Now I worry and I mourn for all of the kind souls who didn’t hesitate to help me. How many may have died? How many are homeless? How many feel the same lack of hope I did in those worst few days of my life? Please, please keep these people in your hearts and do something to help. Thoughts and prayers aren’t enough. People who are already in poverty are always hit the hardest. This is one cause, but please find some way to contribute to ease the great suffering these good people are experiencing.