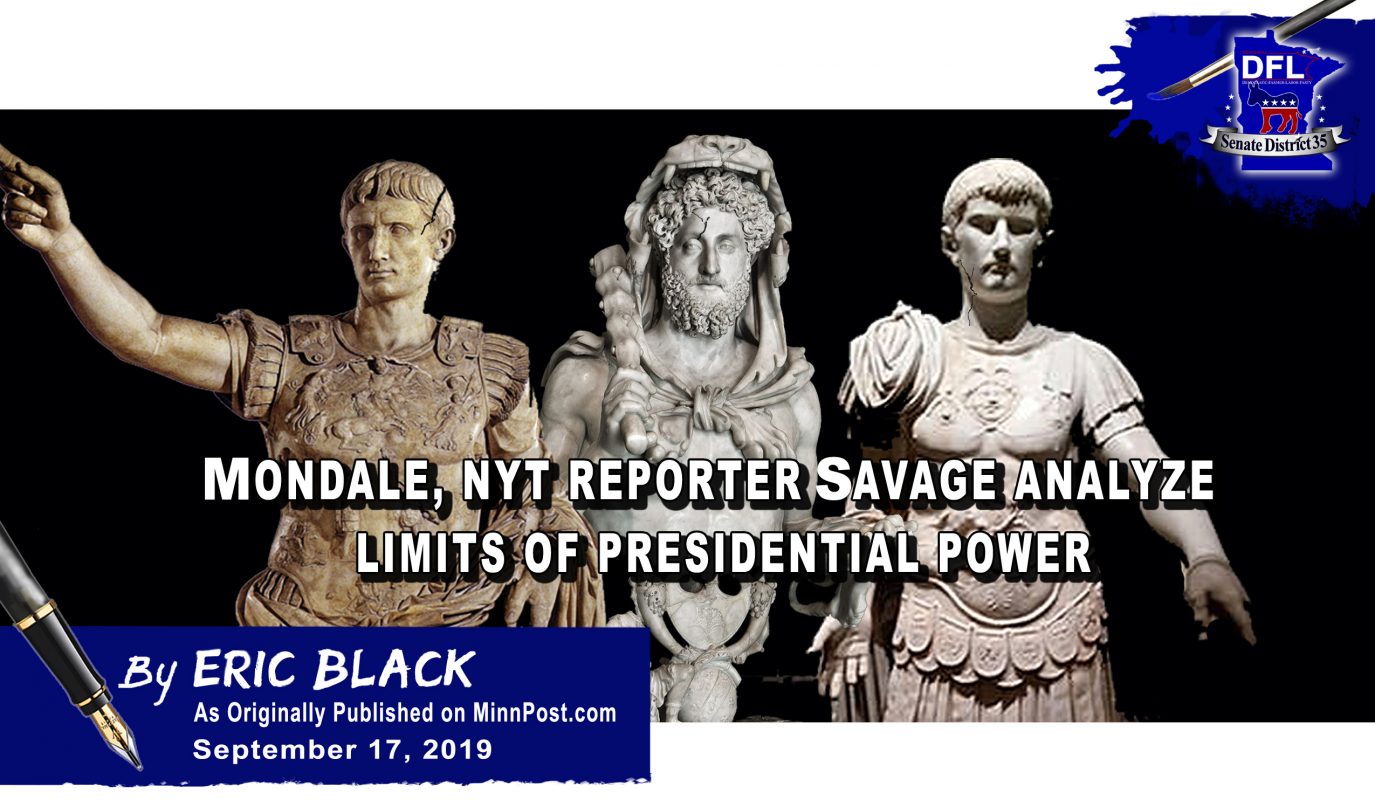 New York Times national security reporter Charlie Savage and former Vice President Walter Mondale had an illuminating discussion yesterday about the limits, or perhaps the limitlessness, of the power of U.S. presidents (and especially the current one) to use U.S. military power in the world without explicit congressional authorization and to use domestic spying for “national security” purposes, without constitutional authorization or oversight.

Both men are experts and have followed those issues for years, and they updated their analysis of those issues to reflect the latest (Trumpian) developments.

Speaking at the University of Minnesota’s Humphrey School of Public Affairs, Savage and Mondale portrayed President Trump as operating with disregard for legal and constitutional requirements along these lines, but both also acknowledged that this is nothing new.

Mondale urged the audience to remember a time when senators of both parties were willing to put defending the constitutional allocation of powers ahead of partisan considerations, a tradition that appears to have disappeared in recent years.

Before World War II, Savage reminded the audience, the United States didn’t maintain a huge, perpetual military establishment. After each war, the nation would demobilize. But, as World War II morphed into the Cold War, the line between war and peace became ambiguous. Presidents were granted, or just assumed, vast new powers to operate, covertly and overtly, around the world and to engage in small wars and covert military actions without advance congressional approval, including the overthrow of foreign governments deemed to be on the wrong side of the Cold War.

During the Nixon years, Savage said, Congress took some measures to reassert authority over whether and when the president could use force abroad. But that trend reversed again.

Even before the Nixon years, during the J. Edgar Hoover decades at the FBI, the surveillance state got in the habit of spying, without proper legal or constitutional authority, on thousands of Americans, in the name of fighting communism or other undefinable categories of what Hoover considered “subversive” activities. These Hooverian tactics included extensive improper surveillance of the Rev. Martin Luther King Jr., Mondale said.

Hoover, whom Mondale said was “detached from reality” on the subject of King, wanted to destroy MLK and arrogated to himself the right “to pick a different leader of the civil rights movement,” Mondale said.

During his Senate career, Mondale was very active in defending the civil liberties of Americans, including the right to be free of unnecessary government surveillance. He recalled on Monday an exchange he had during an oversight hearing with Clarence Kelly, after Kelly succeeded Hoover in 1973, about the possibility that FBI surveillance threatened the rights of American citizens to privacy.

Kelly, Mondale recalled, said that “sometimes you have to give up some rights to protect others.” As Mondale described the exchange yesterday, he replied by demanding that Kelly specify “which rights” Americans would have to give up. A flustered Kelly said, “I didn’t mean it that way.”

As Savage sees it, a lot of civil liberties issues that “we thought were settled were reopened” after the terror attacks of Sept. 11, 2001, implying that a frightened America allowed President George W. Bush and Vice President Dick Cheney to again start trading guarantees of freedom for promises of security.

Since then, presidents have acquired vast new executive powers, sometimes called “the imperial presidency.” “The line moves, then moves back,” he said. Some of Trump’s assertions of unprecedented presidential powers are “provoking Congress,” he said, and have sparked renewed discussions of whether and how executive authority in such areas might need to be restrained.

For example, Savage asked, does President Trump have the power, without a congressional declaration of war or any other clear authorization from Congress, to order U.S. bombing of sites in Iran that Trump believes are part of a program to develop an Iranian nuclear weapon?

Whether you think such a bombing mission would be good or bad, you would have to acknowledge that such a pre-emptive strike, which would probably kill Iranians, without prior congressional authorization, would seem to violate the constitutional provision that gives Congress the power to declare war. This is just me talking, but it seems the obvious context for the point Savage (and Mondale) were discussing.

The Constitution gives Congress the sole power “to declare war.” If the United States can bomb a country on which Congress has not declared war, or perhaps explicitly authorized an attack, what meaning is left to the constitutional provision that assigns war-declaring power to that branch?

Savage noted that Attorney General William Barr has, at least in the past, taken the position that such an order from the president, without advance congressional approval, would be legal.

Mondale disagreed with that view (and a plain reading of the constitutional provision on declaration seems to agree with Mondale). He said yesterday: “I think the Constitution expects a president who wants to start a war has to come to Congress for authority to do so. Our founders wanted that to be part of the division of powers. … I think we should not allow a president to redefine the Constitution on war powers. … You should have to go to Congress for that authority, and we’ll all be better off if we do.”

Mondale just sort of stuck up for quaint idea of obeying the Constitution, allowing U.S. democracy to work the way it was designed.

I wish I shared his confidence, but I’ll give him the last word. Professor Lawrence Jacobs, who moderated the discussion, asked whether he thought democracy is in retreat. Said Mondale, pretty forcefully:

“No, I keep hearing these doomsday guesses about where democracy is heading. I think there’s every reason to feel optimistic about it.”