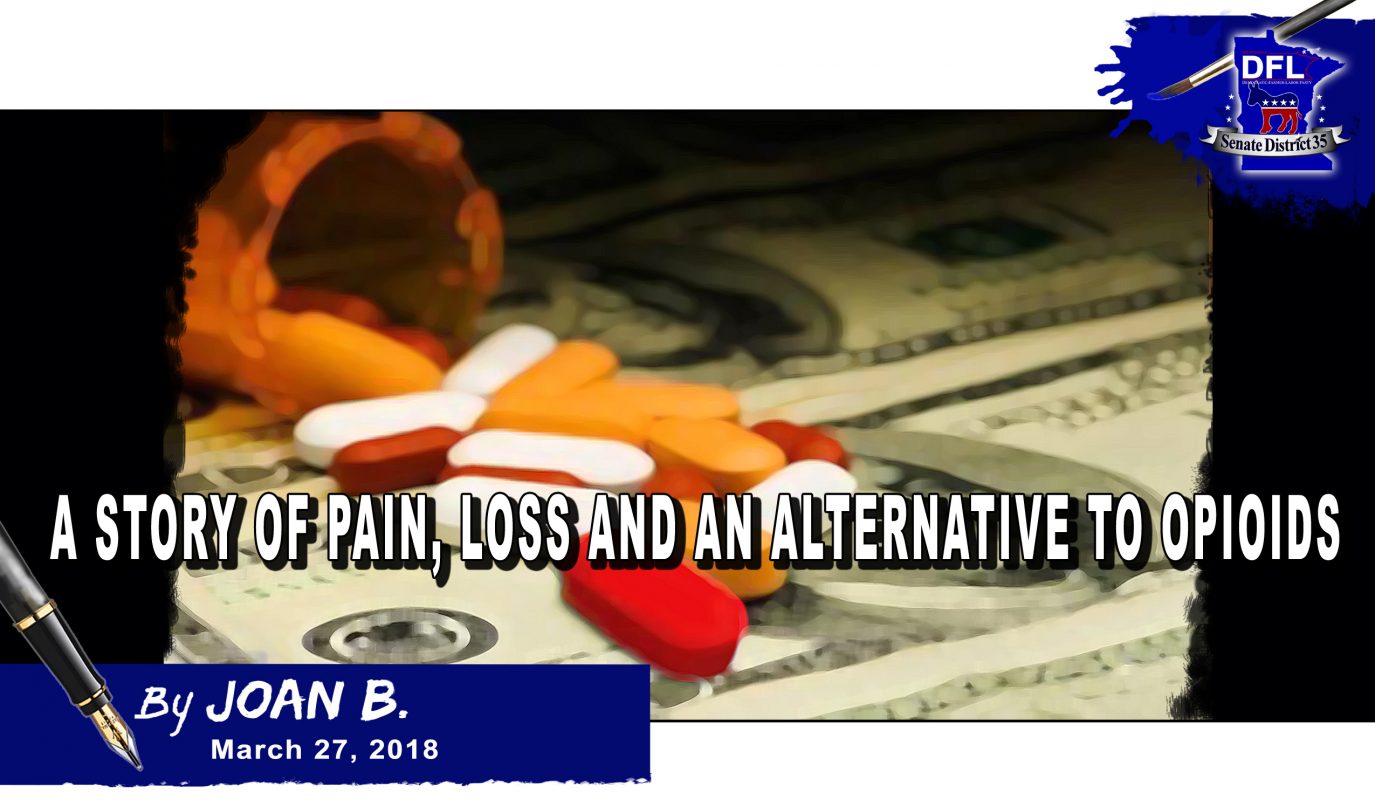 My name is Joan, and I suffer from pudendal neuralgia; a rare pelvic pain condition that affects my ability to sit, to have sexual relations, and affects both urinary and bowel function. In addition, I am unable to walk for any length of time. It affects pretty much every aspect of my life.

In 2001, I took a traumatic fall off my front step. I landed primarily on my left side and thought I had broken my hip. We had just gotten our first little dog and I was holding him in both arms so I didn’t block my fall at all. Before my accident, I worked for years as a CRDA Dental Assistant; after my accident, I could no longer bear to do my job, the sitting pain was horrible. Within six months of the fall I had a cupboard full of Oxycontin, Fentanyl patches, Methadone and anything and everything in between.

I ended up at the Mayo Clinic in September of that year, shortly after 9/11. There, I was diagnosed with Pudendal Nerve Entrapment. The only treatment Mayo was offering at the time was CT guided nerve blocks.  I had three of these procedures, yet was still unable to work or do all the things I loved to do. At the Clinic, I was told that they knew of only one doctor in the world who was doing decompression surgeries, a Professor Roger Robert in Nantes, France.  My husband and I made the journey and I had the surgery. Recovery took over two years and involved several trips to San Francisco for specialized women’s health physical therapy.

During this time my son, then 15-16 years old, was struggling with depression and anxiety.

I did not know that kids were stealing meds from their parents.  I came to find out that my son was stealing my medications and taking them, after he was already addicted to them.  Shortly after my return from France I entered an accredited chronic pain clinic, where I’m still enrolled to this day.

I picked my son up from the Elk River Jail on October 21, 2014. From there we went to the Methadone clinic. I was under the impression that he was doing some sort of an intake to get back into treatment. That was a lie. Years of drug abuse had rewired his brain. He was having massive seizures around this time, and had also contracted HepC. His seizures were getting more intense and lasted longer.  Even while in jail he had a major seizure and was hospitalized. I had two or four Methadone pills in my purse that day. I always took great care in knowing where my meds were; even being in the rush of bringing in groceries, and worrying about having our son in the house again.

I lost my son Adam on October 22, 2014.  He was found unresponsive downstairs in our home.

It was devastating to our family after we watched our son die a slow death for 14 and 1/2 years. We tried tough love, we tried more love, we tried multiple rehab clinics and outpatient programs. None of it was long enough or good enough. We didn’t have an unlimited amount of money to send him to the more expensive places, we did what we could. Adam turned to heroin when he didn’t have access to my locked up meds.

Our loved ones suffering with the godawful disease of drug addiction deserve more than jail.  Putting my son in jail without immediately placing him in a drug rehab facility after his incarceration killed him just as surely as the meds in MY purse did.

Minnesota has a medical cannabis program. I am currently enrolled in the program even though it is highly restrictive and extremely expensive. For instance, replacing $34 worth of meds at CVS would cost $400 a month at the dispensary. At present time, I am unable to afford what I need, forcing me to still require dangerous and deadly drugs such as methadone and other narcotics.

Right now at this very second, someone has these deadly, highly addictive medications in their home. Right now at this very second, those meds are falling into the wrong hands. Right now at this very second, another mother and father are finding their child dead of an overdose. Therefore my goal is to make this plant, which has never killed anyone, legal and regulated. I’ve given this considerable thought; we must make cannabis legal so EVERYONE in Minnesota who wants to use a safer alternative to pharmaceuticals may do so. It’s unbelievable to me that in the year 2018, this plant is still being demonized. Besides the opioid epidemic, prohibition of cannabis feeds the private for-profit prison system as it disproportionately affects people of color.

I am now a sitting board member of Minnesota NORML, the state chapter of the National Organization for the Reform of Marijuana Laws. I am advocating the full legalization of cannabis and the expunging all criminal records involving cannabis possession.